Neural Networks  and the Emergence of Complexity 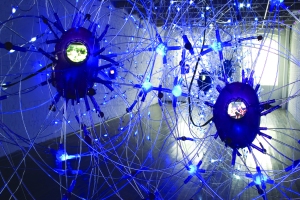 On Memory by Deborah Aschheim

“The brain… can be understood as a complex system or network,
in which mental states emerge from the interaction between multiple physical and functional levels.”

The immediacy of drawing, the simplicity and accessibility of the materials used, make it a particularly good reflection and model of the human brain and mind in action, recording how we perceive, understand and process our experiences.  The artists in this exhibition trace mental states and patterns of thought through their drawings, in some literal and not so literal ways.   Neural synapses, ganglia and networks become metaphors and vehicles of subjective memory in L.A. artist, Deborah Aschheim’s, drawings and installations, as signifiers of quite personal efforts to hold on to the past.  In contrast, Margaret Neill uses the drawing process as a way to heighten her experience of the present moment and transmit them to us through her site-specific wall drawings.  The Brooklyn-based artist says, “I make drawings to forge a path to new territories of my perception.”

Our brains, through mechanisms still quite opaque, somehow manage to knit together a functional and unified illusion of a stable external reality through a multitude of tiny acts of attention to a wide variety of sources.  Not just visual perception, but past experiences, and other kinds of sensory information, such as the movement of our bodies in space and inner awareness of our own heartbeat , influence what we see and notice.  The emergent complexity of William Holton and Laura Battle’s works mimic the miraculous processes and structures of the brain itself: countless iterations of relatively simple actions by these New York artists add up to something much more than the sum of its parts. The Korean artist, Jeesoo Lee, now living in Massachusetts,  makes the struggle for coherence among fragments of information the subject of her collaged work.

In this exhibition, we see not only the finished drawings, but the drawing process itself.  Through videos shot in the artists’ studios we can watch them creating  several of the works we see on the walls.  Rather than starting with a clearly defined preconception of what the final product will look like, all the artists in this exhibition ask “what if?”  knowing  how to draw themselves into an unpredictable situation through repeated acts of making their mark.  It is a dialog, a conversation,  that, as Tara Geer,  Manhattan-based artist, says, “the drawing is telling me some stuff and I’m telling it some stuff.  Jane Fine and James Esber, of Williamsburg, Brooklyn, intensify this dialog  by trading their drawing back and forth, creating the work of a fictional alter-ego, J. Fiber.

“‘Each drawing is made from the inside out, leaving a trail for others to follow from the outside in.” explains Michael Moore, of Philadelphia.  Moore feels his way into the surface of the paper, and we can follow his journey, as he draws air and space out of the flat surface, constructing abstract landscapes out of  memories of lived experiences. For Wennie Huang, a first generation Chinese American and native New Yorker, her  red pencil evokes traditional Chinese culture of her parents’ world, just as Moore’s pen and ink recall the great drawing traditions of the Italian Renaissance.  Like Moore, Wennie Huang also creates landscapes of the mind, which invite us into a mysterious, yet familiar space.  Vermont-based Sumru Tekin assembles an installation of altered photos and drawings alluding to a more difficult personal and historical past, the Turkish destruction of the Armenians of the Ottoman Empire – the Catastrophe.  Born in Erzurum, Turkey and emigrating to the US as a child, she uses the drawing process in her attempts to reconstruct the impossible, asking the question: “How can one represent a deferred encounter with an irretrievable moment?”

Recent neuroscientific research, by Antonio Damasio at UCSD and others, demonstrates the close relationship between feeling and thought, and have shown us how our emotions have evolved to guide us, so that we can “feel our way” through an unpredictable world.  The honorary artist of Moorfields Hospital, London, British artist Jen Wright takes us into a very different arena, in which attention to what Damasio has called “the feeling of what happens” is a matter of life and death.  Her sensitive, tactile studies of skulls are informed by her collaborations with Maxillofacial surgeon, Dr. Neil Shah and others.  She uses drawing as a means to observe and understand the surgical process, following along the movements of the scalpel with the movement of her pencil.  Also exploring medical cognition, Manhattan-based artist and researcher Virgil Wong visualizes the medicalized human body with  interactive digital technologies as well as through his detailed drawings in the gross anatomy lab.

Neuroscientists and cognitive psychologists (such as Susan Goldin-Meadow) are showing us how what we imagine as our minds, are much more than our brains.  The internal  awareness and movement of our bodies, and our gestures, those ill-defined yet surprisingly essential hand movements that accompany speech, help us navigate through concepts and understandings not yet completely within our grasp. Westchester-based curator and artist, Andrea Kantrowitz, is interested in the ways in which drawing can be understood as the visible trace of the ways in which we think not just with our brains, but with our hands and bodies as well.  These traces of awareness, action and movement, even in the finished drawing, allows us to intuit this process, and follow along the artist’s journey.
Andrea Kantrowitz is an artist, teacher and doctoral candidate at Teacher’s College, Columbia University and a member of the international  Drawing Research Network. She holds a B.A in Art and Cognition from Harvard University and a MFA in Painting from Yale, and is an adjunct professor in the graduate program in art education at the College of New Rochelle. She has also worked for many years as a teaching artist in the New York City public schools. Her research examines the cognitive interactions underlying contemporary artists’ drawing practices, and she is analyzing the drawing processes of several of the artists in this exhibition.  She is represented by Kenise Barnes Fine Art in Larchmont.

Children in the Gallery

Join us in the Gallery to explore the Exhibition, followed by a hands-on art project inspired by the exhibit. Free! Children ages 5-10, accompanied by an adult. Reservations required.

This site uses Akismet to reduce spam. Learn how your comment data is processed.